get a quote today

Fond du Lac, French for “farthest end of the lake”, is named after its location at Lake Winnebago’s south end.

Native American tribes, including the Winnebagos, but also the Kickapoo, Potawatomi and Mascoutin, lived in or gathered in this area long before European explorers arrived.

It is not known who the first white man to explore Lake Winnebago’s southern end, but it was likely Claude-Jean Allouez. He was followed by French fur trappers.

James Doty was a federal judge in the western Michigan Territory. He thought the land at Lake Winnebago would be a suitable location for a city and so he bought the land with his partners. John Arndt, a Wisconsin Territorial Legislature member, proposed that Fond du Lac be made the capital in 1836. Doty persuaded the legislature to select Madison over Fond du Lac.

The construction of the Military Ridge Road was begun in 1835. It ran through Fond du Lac connecting Fort Dearborn in Illinois with Fort Wisconsin. In 1852, the first railroad arrived in the area. Having access to the lake, logging and milling were the main industries of the late 1880s.

Fond du Lac is a city that’s well-known for being a central geographical location and a manufacturing hub. Fond du Lac, located just an hour from Milwaukee and Madison, is at the base one of the largest inland lakes in the country. Lake Winnebago, a four-season paradise in our backyard, is known for its exceptional fishing, windsurfing and snowmobiling.

Fond du Lac is more than a beautiful lake. Beautiful golf courses, picturesque roads, idyllic villages, and hiking and biking trails are just a few of the many examples of Mother Nature’s best work. With its healthy deer, turkey and waterfowl populations, this area is a hunting paradise. The revitalized downtown has fun boutiques, museums and galleries to choose from, as well as restaurants to satisfy the inner chef and accommodation to suit every budget. 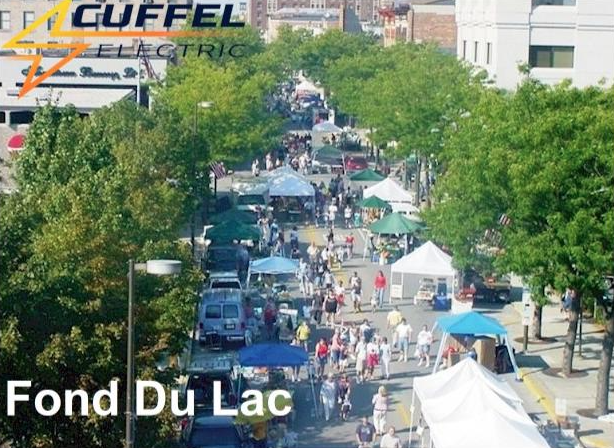 Locally owned and operated, Cuffel Electric of Kewaskum WI has more than 25 years of commercial and residential electrical experience. Our licensed professional electricians always provide an honest assessment of the job along with an upfront estimate so that there are no surprises when you get your final bill.

Whether you need lighting installation, a wall charger for your electric car, electricians for a rehab property, are trying to conserve on your energy bills, or have a large commercial project – Cuffel Electric should be your first call, and we also provide 24 hr. emergency service 7 days a week.

Home
Services
About Us
Gallery
Blog